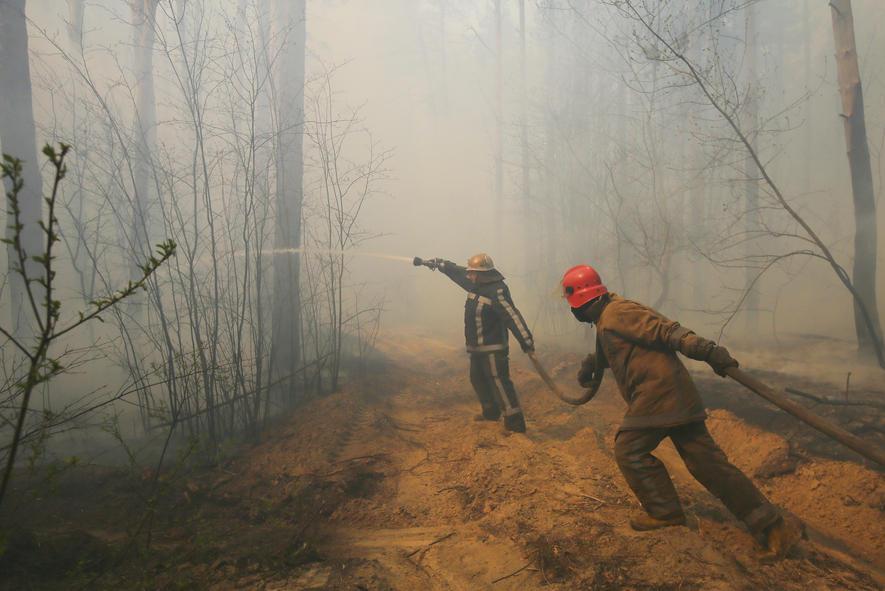 Ukrainian Authorities on Tuesday announced that there were no longer any major fires in the area, after more than a week of battling forest fires in the radiation contaminated Chernobyl exclusion zone.

According to Ukraine’s State Emergency Service, there is no open fire again, but just a slight smouldering of the forest floor.

“More than 400 firefighting personnel were working in the area on Tuesday to complete the job. Recent rainy weather has complemented the service’s efforts.

“Environmental experts feared that the fires could stir up radioactive ash in the ground, potentially blowing contamination-laden smoke to the capital Kiev,“it said.

The 1986 reactor meltdown and explosion at the Chernobyl nuclear power plant, about 100 kilometres North of Kiev, is considered the worst nuclear disaster in history.

However, authorities assured on Tuesday that radiation levels in Kiev did not exceed natural background values.

A senior environmental official, Egor Firsov, said amid the beginning of the fires more than a week ago that radiation in the Chernobyl zone was detected at 16 times higher than normal background levels.

Firefighters have been working to extinguish the fires in the predominantly uninhabited zone for 10 days, with strong winds in recent days having complicated their efforts.

Meanwhile, the current extent of the blazes had not been disclosed. However, authorities citied data from a couple of days earlier, saying the fires had covered a total area of about 3,500 hectares.

Authorities had attributed fires in the Chernobyl zone and elsewhere in Ukraine in recent weeks to relatively dry conditions after a winter that lacked sufficient snow cover.