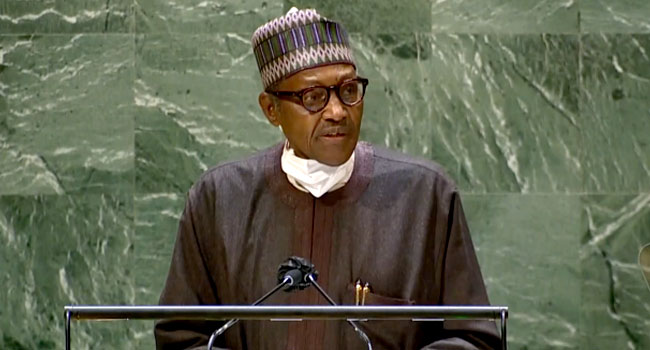 President Muhammadu Buhari on Friday in New York called for the world wide application of the Arms Trade Treaty, ATT, to codify accountability in conventional arms trade, which is critical to the security of nations.

Speaking at the general debate of the 76th UN General Assembly, Buhari expressed concern over the illicit trade, transfer, and circulation of small arms and light weapons.

The Nigerian leader warned that the excessive accumulation and uncontrolled spread of these weapons in many regions of the world are having devastating humanitarian and socio-economic consequences, especially on the continent of Africa.

Buhari, who was the second speaker on the fourth day of the annual general debate, emphasised the need for broad-based global partnership in the on-going battle against trans-border crimes, including terrorism and piracy.

The UN correspondent of the News Agency of Nigeria reports that the Nigerian leader also spoke on the current political situation in West Africa amid recent coups in Mali and Guinea.