Wenger hits out at referees, blasts media after 2-2 draw against Chelsea 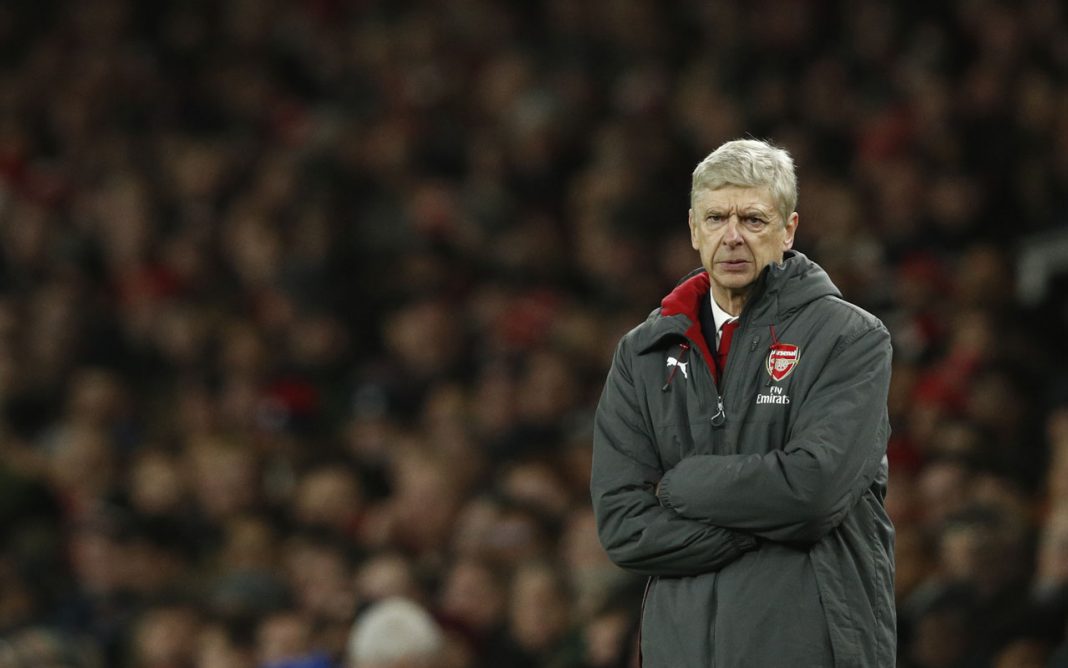 Arsenal’s French manager Arsene Wenger looks on during the English Premier League football match between Arsenal and Chelsea at the Emirates Stadium in London on January 3, 2018. / AFP PHOTO / Adrian DENNIS / RESTRICTED TO EDITORIAL USE. No use with unauthorized audio, video, data, fixture lists, club/league logos or ‘live’ services. Online in-match use limited to 75 images, no video emulation. No use in betting, games or single club/league/player publications. /

Arsene Wenger was in a defiant mood following Arsenal’s enthralling 2-2 draw with Chelsea at the Emirates Stadium.
Wenger saw his side give away a second penalty in as many games on Wednesday night after Hector Bellerin brought down Eden Hazard.

And in his post-match press conference, Wenger called the penalty decision ‘farcical’, criticised the game’s referees and slammed the media’s questions in a fascinating seven-minute rant..

Wenger transcript in full
‘I think it was a great football game. Where we saw fantastic action on both sides. A game where we have shown great mental resources. I knew before the game that the last 20 minutes could be difficult for us, because we have a big disadvantage with the schedule.

And we got again a farcical decision on a penalty, but we knew that as well before. So we have to deal with that. And that’s it, basically.’
Penalty?

‘I don’t know. I don’t want to talk about that. I’m fed up with that. The referees get away with you, with the English press always no matter what they do. You have watched the game last night. You couldn’t read a line about it today. So that’s that, nothing will change. So we have to deal with that and to live with that.’

Charge (from the FA)?
‘Nothing at all.’
What do you mean, you knew before the game?
‘I mean nothing. You are always more intelligent than everybody. So you can guess what happens.’

Last night’s game (Swansea vs Tottenham)?
‘Referee decision influence the game. No? Tottenham against Swansea. But nobody talks about it. So that means nothing will change.’
Offside and the no red card?
‘You watched the game like I watched it.’

But I’m not important?
‘No, no, you are important. You defend football.’

Will VAR change things?
‘I am very sceptical.’

Will you contest the charge?
‘100 per cent. You can listen to every interview I said, and I stick to everything I said without any problem. I am 35 years in football, I know what I say after the game.
And I stand up for what I said, no problem.’

Conscience is clear from what you said in dressing room?
‘What I find terrible is that we have just seen a great football game and we talk only about things that are nothing to do with football. I would love at some stage that you stand up in the morning and say ‘we’ve seen a great football game’.
But you’re not interested in that. And for me, that would be nice, that at some stage we speak about football again. What are we talking about? It’s nothing to do with football.’

‘What I am finding is just what I want to tell you. I would love to talk about football.
Because that’s what I love. And we have seen a great football game tonight. What are we talking about? Not about football.’

Is it frustrating that you are now 6th?
‘Yes. That is very frustrating. We have to look at ourselves as well but still I think it was a great football game. When you look recently, our performances have been top quality but the regret we have is that we have not the results we could have had, certainly on some parts because of our problems but as well, on the other side, you have to say that we have not been gifted with luck.’

Wilshere? Outstanding?
‘Yes. That’s football.’
It’s 2.5 years since he scored for Arsenal. Some comeback?
‘Yes. I think he is at the level now where not many people expected him to be. When was the last time he played for England? It was against Iceland at the Euros. He came on. Since he has not played for England and that means everybody had given up on him.

And today nobody would be surprised if he was selected again so that means, instead of us being criticised for that, I think first of all he deserves great credit for a remarkable strength, and we do as well.’
Bellerin?
‘What you get easiest at the moment, no matter who you are, is criticism. That is for free on the market and it flies around in a very severe way and every player gets that. The only response they can give is on the football pitch and he’s a remarkable fighter.’

Greek kid, closing in on a deal for him?
‘Yes but he is not ready to play for us. We’ll give him out on loan.’

Describe emotions at the end when Morata went through?
‘Look, it was a bit … I don’t know. Maybe I would have gone home and committed suicide tonight.’
Must have been shocked?
‘I was so close to that, yes.’

Wilshere might have had a second yellow for a dive?
‘That would have made you happy.’
Seriously, though, did you see it?
‘Honestly, no.’