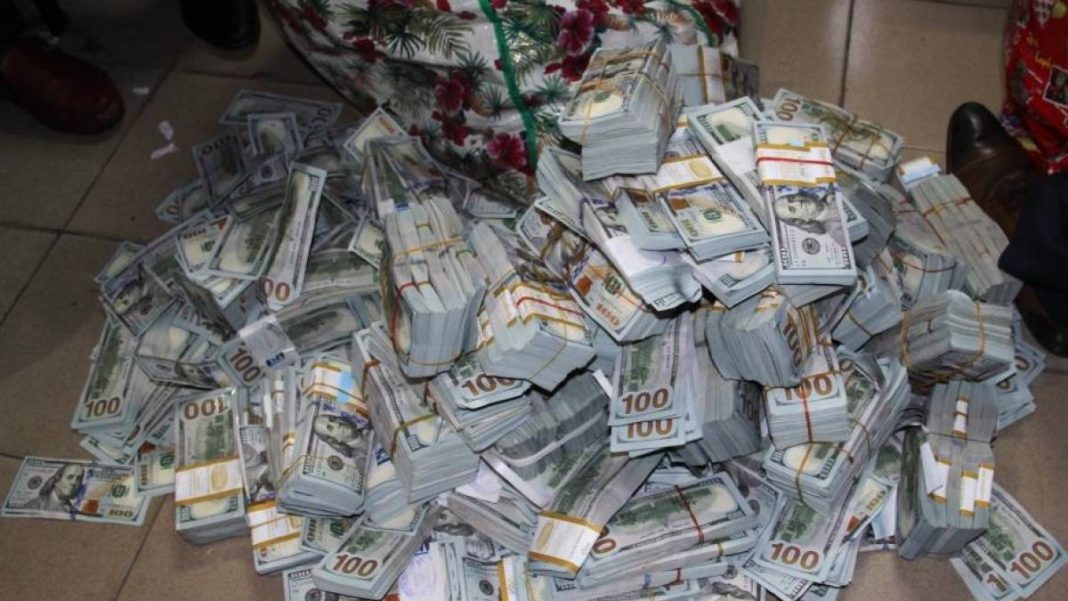 Ibrahim Sha’abanhttps://dailynigerian.com/
Jaafar Jaafar is a graduate of Mass Communication from Bayero University, Kano. He was a reporter at Daily Trust, an assistant editor at Premium Times and now the editor-in-chief of Daily Nigerian.
- Advertisement -

Following the saga that ensued after the payment of the first tranche in whistle blowing proceed for the Ikoyi Osborne Tower cash recovery, the Federal High Court, Abuja Division has fixed January 17, 2018 for hearing.

The court action was instituted against Finance Minister, Economic and Financial Crimes Commission, EFFC, Office of the Attorney General of the Federation, OAGF, and three others on part payment of Whistle-blowers entitlement.

It could be recalled that a huge sum of the $43.4m, N23.3m and 27, 800 Euros were recovered by the anti-corruption agency in the Flat 7, Osborne Towers, Ikoyi, Lagos through whistle blowing efforts.

PRNigeria confirms that Justice Ijeoma Ojukwu of the Federal High Court is billed to adjudicate on the court action instituted by one of the Original Whistle-blowers, Abdulmumini Musa.

Mr Musa is praying for a mandatory injunction to stop the minister of Finance from excluding him from the payment of the 2.5% to 5% of the Whistle-blowing fees.

The Court Action by Mr Musa was sequel to the move by the Minister of Finance, Kemi Adeosun to pay a sum of N421m to the Whistle-blowers without the plaintiff benefitting despite the facts that joint efforts led to the recovery of the huge sum.

To ensure that there is no obstacles in quick determination of the suit, hearing notice has been served on all the six defendants in the court action.

In the suit filed by Abdulhamid Mohammed in Abuja, the plaintiff claimed to have participated actively in the whistle blowing efforts that led to the recovery of the money by the EFCC.

The court action with No. FHC/ABJ/CS/1158/2017 also has Bala Usman, Stephen Sunday and one Sheriff, all of Suite 6, Kujre Oil and Gas Filling Station, Abuja as 4th, 5th and 6th defendants respectively.

Plaintiff in the writ of summons claimed that he, 4th, 5th and 6th defendants’ jointly volunteered information to EFCC operatives which eventually led to the recovery of the huge local and foreign currencies.

Specifically, the plaintiff sought court declaration that he is entitled to share from the approved whistle-blowing entitlement by the Minister of Finance and order of the court directing the EFCC.

He also prayed that the minister include his name as part of the beneficiaries of the whistle blowing fees along with the 4th, 5th and 6th defendants as they actively participated and are instrumental to the whistle blowing or disclosure of information which eventually led to the recovery of the huge sums of money.

Following the issuance of hearing date and the assignment of the suit to Justice Ojukwu, counsel to the plaintiff Abdulhamid Mohammed of Hammart Legal Chamber has written another strongly worded letter to the Finance Minister, EFCC and Attorney General of the Federation warning them to follow the path of the rule of law in the payment of the whistleblowing fees.

The letter dated December 12 and officially received on December 13, 2017 specifically informed the Finance Minister that the Writ of Summon has been served on her and sufficient notice giving to her office to enable her stay action on the payment of Ikoyi Whistleblowers entitlement and to wait for the final determination of the matter, pending before the court.

The letter expressed surprise with news emanating from Office of the Finance Minister that arrangement have been made to pay the money at the exclusion of the plaintiff and warned that such an action would be against injustice.

The letter read in parts: “We write to further inform you that a Writ of Summon in respect of Court Action on whistleblowing payment has been served on your office.

“By the Writ sufficient notice has been given to your office to enable you stay action on the payment of the Ikoyi Whistle-blowers entitlement pending the determination of our client’s suit.

The letter signed by the plaintiff’s counsel also read in part: “In the interest of Justice and obedience to the rule of law, we urge you to halt the payment of the Ikoyi’s whistleblowing fee so as not to overreach preceding in the court and which will obviously prejudice the outcome of the matter pending in the court.”

Meanwhile, reports in the media indicate that part payment had been disbursed to the other whistle blower to the exclusion of Abdulmumin Musa and two others despite several complaints from the petitioner to both the Minister of Finance and her counterpart at the Justice Ministry and Attorney General of the Federation through their lawyers.

According to media reports monitored by PRNigeria, the first whistleblower’s lawyer had confirmed the development, adding that the federal government would make up the balance in the first quarter of next year.