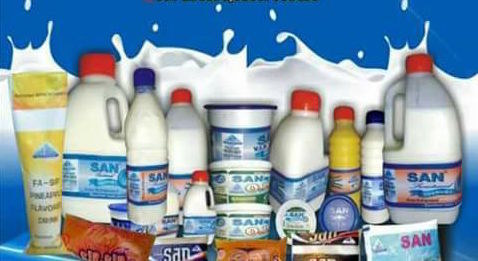 Adetunji Oredipe, Task Team Lead, World Bank, on Friday assured the readiness of the bank to support Zaria based SAN Yoghurt company to boost its production.

Mr Oredipe stated this during a visit to the factory, a subsidiary of SAJ Food Nigeria Limited located at Zabi on Kaduna-Kano expressway, Zaria, Kaduna State.

The News Agency of Nigeria reports that the support would come through Agro Processing, Productivity Enhancement and Livelihood Improvement Support Project, APPEALS.

Mr Oredipe said: “What we are trying to do under APPEALS is to enhance productivity of our farmers to fix the value chain in this wise; dairy farming.

“And in fixing the value chain when you take from where you move it to the field till when the farmers is able to raise the animal, produce the milk, then you take it up and turn it to yoghourt as the end product.

“There is a lot of nots along this chain, if any of the nots  is weak, then the final thing you get will not be optimal, so, our job as a team working with your team is to look at all the nots and fix all the problems.

According to him, the beauty of the relationship is in identifying those roles and everybody playing according to the rules.

He expressed satisfaction that the company agreed to work with the farmers.

“We observed that for you to work with them, they need to be better organised for it to make sense for you, we need to do it in such a way that they all meet you at a collection point and that will make the job a lot easier for you.

“So, those are the little little things that we need to do to make your own job easier and from your end you will be interested in the quality of the milk you are picking, the way the milk is handled and other expectations.

“To do that, we are happy that you have invested here and for this investment to continue to flow every other person has to play according to the rules.”

Mr Oredipe said the programme needed to know what prompted the company to go into the business, knowledge of raw materials supply, and where the targeted farmers are located, within or outside the state.

The TTL also enquired about the company’s programme to support the farmers as well as the profitability of the business so that they could meet them at a point.

“You need to educate us on your understanding of the profitability of this business we are trying to do together, then you can be specific about some of the things you will expect APPEALS to do for you.

“In what we call productive alliance relationship, which is the type you are having between you and those farmers now, there are things that you need to do.

“For example, if because you know that the number of farmers that are willing to do business with you have increased and you need to increase your own line of business.

“May be you are using two lines or three lines, you want to add one, you can discuss that, if we partner with you in doing that, not only because of you but to be able to actually meet the needs of these extra farmers that are coming on board,” he said.

Responding, the Managing Director, SAJ Food, Sanusi Abdullahi, appreciated the team for what he described as progressive visit.

Mr Abdullahi, who was represented by the General Manager and Dairy Manager SAJ Food, Alhaji Aminu Yahaya-Masanawa said the company was collecting milk from a lot of farmers.

He recalled that SAJ Food started producing yoghourt with powdered milk, adding that initially all their facilities were to accommodate powdered milk only.

Mr Abdullahi said: “But as the dairy sector is changing, Nigeria is changing too, so we need to change our facilities too to the fresh milk collection instead of the powdered milk.

“In that wise, we started to organise the farmers, started to visit them and we started to collect the milk from them. Initially we had a lot of challenges transforming from powdered milk to fresh milk.

“Sometimes even the milk collected from farmers will reach us not in a healthy way, sometimes it will be contaminated, yet, the Managing Director because of his interest in it continued to invest, continued to collect the milk despite the losses we have been making.

“Thank God gradually we started achieving results, as at now we have a lot of farmers, as at today, we are collecting up to 7,000 liters of fresh milk for processing.” the MD said.

He, however, said that the company had the capacity to process 72,000 liters at a shift of eight hours, adding the company gradually grew from collecting 100 to 200 up to the present 7,000 litres.

On challenges, Abdullahi identified the scattered nature of farmers’ settlements and need for a milk bulking truck to ease collection of the product.

He assured that the company was making efforts to produce yoghurt using 100 percent fresh milk.