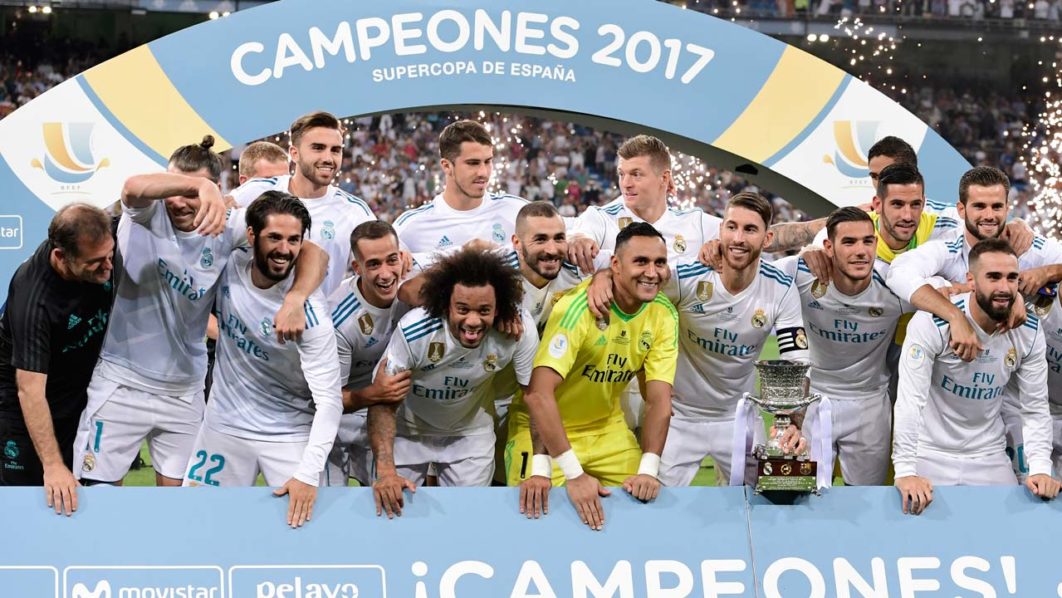 Real Madrid’s defender Sergio Ramos (3rdR) holds the trophy as he and teammates celebrate their Supercup after winning the second leg of the Spanish Supercup football match Real Madrid vs FC Barcelona at the Santiago Bernabeu stadium in Madrid, on August 16, 2017. JAVIER SORIANO / AFP

After enjoying extraordinary success in 2017, with an unprecedented haul of five trophies, Zinedine Zidane begins his third year in charge of Real Madrid with a trip to second-tier Numancia in the Copa del Rey on Thursday.

The match will mark the second anniversary of Zidane’s appointment as Madrid coach as the successor to the sacked Rafael Benitez. The Frenchman has since gone on to win eight out of a possible 10 trophies from just 116 games in charge, a remarkable tally for someone who had never previously coached at the top level.

“Your appetite comes from eating. We are never tired of winning,” Zidane said at a press conference on Wednesday.

“Perhaps it does wear you down a bit. Certainly, when you are at such a high, the only way to go is down a bit before you can then climb back up again.”

They followed their victories in the European and Spanish Super Cups at the start of the campaign by winning the Club World Cup in December to make it a record five trophies for the year.

However, the year ended with a 3-0 home defeat to Barcelona in the clasico, a result that left them fourth in La Liga, 14 points behind their great rivals at the summit, albeit with a game in hand.

The Copa del Rey is the one trophy Real have not won under Zidane, and they will be eager to avoid a slip-up when they go to the bitterly cold northern town of Soria to face Numancia in the first leg of their last-16 tie.

It is the start of what will be a hectic month, as long as Real continue to progress in the Cup, before they host Paris Saint-Germain in the last 16 of the Champions League in February.

“I will try to finish the season as well as possible because we still have a great chance of winning things again,” added Zidane, who is without Karim Benzema due to injury.

“That is what motivates me and the team. I am not looking beyond the next six months.”

Meanwhile, Zidane was guarded on suggestions that the club would make a move for the Athletic Bilbao goalkeeper Kepa Arrizabalaga in this month’s transfer window.

“We have the possibility of signing players until January 31 so anything could happen.

“I am satisfied with my squad. I have built it myself, so I take responsibility for that.”

Holders Barcelona also play on Thursday, travelling to Celta Vigo, who eliminated Real last season in the quarter-finals. The return matches will be played next midweek.