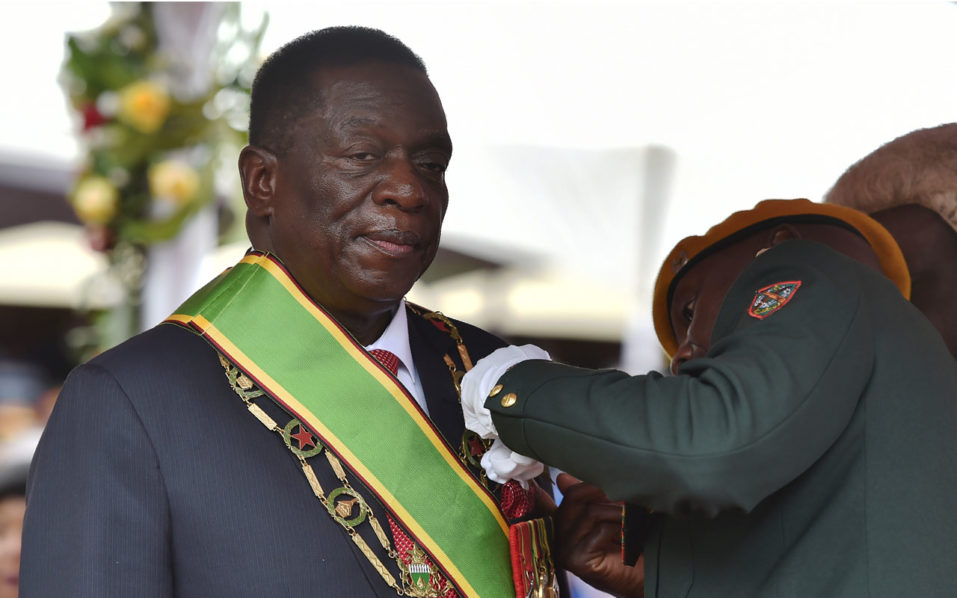 (FILES) This file photo taken on November 24, 2017 shows Zimbabwean new interim President Emmerson Mnangagwa receiving the chain and sash of office from the Chief judge of the Supreme Court, Chief Justice Luke Malaba as he is officially sworn-in during a ceremony in Harare. Mnangagwa unveils on December 1, 2017 his first cabinet, drawing criticism for recycling the old guard and rewarding cronies who helped propel him to power following a military takeover and mass street protests. / AFP PHOTO / TONY KARUMBA

Zimbabwean President Emmerson Mnangagwa made a home visit on Friday to the leader of the country’s main opposition party, Morgan Tsvangirai, who has been battling cancer.

The visit came as Zimbabwe’s political parties prepare to begin campaigning for elections due later this year — the first since former president Robert Mugabe stood down following a brief military takeover.

An image of the meeting showed Tsvangirai looking frail as he sat on a couch next to Mnangagwa who appeared relaxed and wore a smart dark suit.

“He is fine. He is recuperating very well. Very soon he will be going back again for further medical check-ups in South Africa,” Mnangagwa said as he left Tsvangirai’s home.

Tsvangirai’s deputy in the opposition Movement for Democratic Change (MDC) party Nelson Chamisa said that Mnangagwa’s gesture was “the politics we want to see”.

Tsvangirai is a former prime minister and a veteran political figure who is hoping to lead a unified opposition bloc against Mnangagwa and his all-powerful ZANU-PF party.

As Mugabe loyalists unleashed a wave of violence against MDC supporters, Tsvangirai pulled out of the race and later entered negotiations with the government.

He subsequently became prime minister in a power-sharing government in which he was widely seen as being out-foxed by Mugabe.